“All the darkness in the world cannot extinguish the light of a single… star!” … that is, the Morning Star! COVID-19 closed the camp but did not stop the spirit!

The Sisters (and campers, too) were extremely disappointed to hear that even though New Hampshire State allowed summer camps to open with 14 pages of restrictions, the officials in the town in which Morning Star Camp is located closed all camps in the town.

Sister Katherine Maria, Sister Superior, addressing the campers about the cancellation of camp told them online, “It was truly heartbreaking for us to make this announcement. After months of being cooped up due to the COVID pandemic, to cancel the opportunity for campers to enjoy their faith with other like-minded Catholics is devastating for us all here. Morning Star Camp has provided weeks of fun and faith in a Catholic environment for thirty-nine years straight, and this is the first time we have been forced to cancel.”

“But the light of Our Lady, the Morning Star will prevail through the apparent darkness. We are not going to let the summer go by without doing something for the campers and keeping the Morning Star spirit alive,” Sister Marie–Celine, the new camp directress said, “if campers can’t come to camp, let’s bring camp to them!” And the idea for a “camp-in-a-box” began.

The Sisters immediately began creating boxes designed specifically for each camper’s age group. Each box included either a spiritual classic book for the older girls or inspirational coloring books for the younger campers; along with explanations and hand-outs for their group’s religion classes. The Sisters prepared colorful craft packages with lanyards, leather kit projects, bracelets and beads, yarn and paper items. They spent hours filming their music activities, singing and games, and put them all onto an instructional DVD, which the campers could watch at home. Although they weren’t able to include campfires in the box, the Sisters did record some campfire songs on CD to send along. Before sealing up the boxes, the right size t-shirt with the camp motto was put in, along with a personalized dog tag, bandana, water bottle full of candy and a handwritten card from a Sister, and for the finale – a handful of confetti!

Campers also received online talks by the Sisters, some fun videos like “morning wake-up bugle,” and Compline, where they could join the Sisters in their evening prayers. And last but not least campers were encouraged to interact with each other by sending in photos and entering the virtual talent show. “Talent Night is one of the highlights of every summer camp week,” said Sister Marie-Bernard, “and it’s important for the girls to share their talent with others. It inspires people to seek and develop their own God-given talents.”

It took the Sisters one month, to the day, to create, pack and send out over two hundred and seventy-five Morning Star Camp Boxes, reaching campers in twenty-four of the fifty US States. The response from the campers who received their boxes has been overwhelming with emails, cards and calls.

Despite our inability to meet this year, the Morning Star spirit of “To Jesus through Mary” continues shining through the box until we resume camp next year. 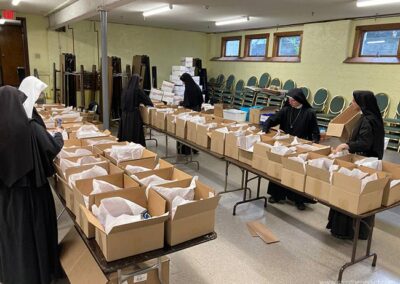 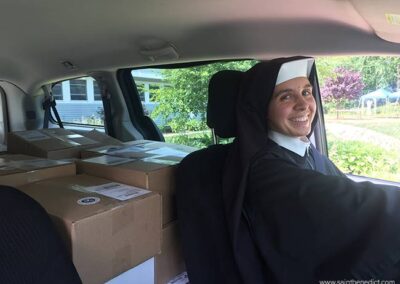 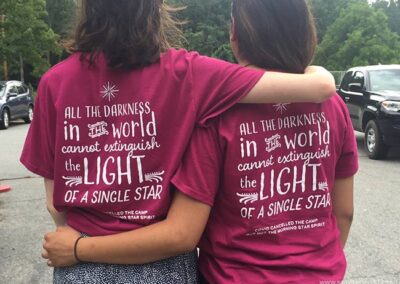